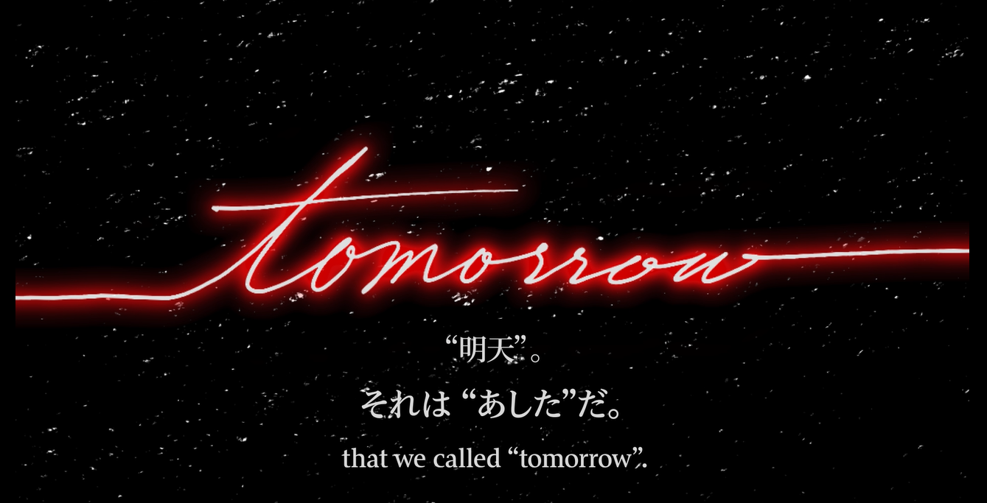 To Believe Is To See 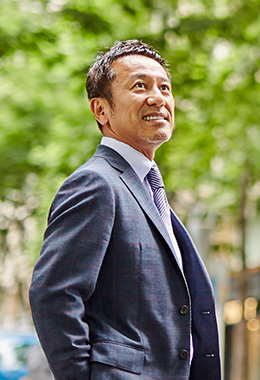 We are not an investment fund.
UNIVA CAPITAL Group was founded in 2006 with the idea of creating a growth-oriented enterprise group through integration of multiple values. Its form can be called a “federated company group”.
I believe that the culture of greed and competition has gone too far, which is one of the reasons for the current economic crisis.
This is not to say that we reject competition.
We intend to press forward together in these challenging times by maximizing the synergies between companies of value, through recognition and leveraging of their own strengths, to gain greater competitiveness.

UNIVA CAPITAL Group comprises 62 operating companies, 15 businesses in 14 countries / regions and approximately 700 employees. Each company’s strengths act as a catalyst for the evolution of the others. The Group will continue to move ahead boldly in this changing world, powered by the resulting synergies that generate energy.

The federation comprises 62 operating companies in 15 businesses, in addition to the UNIVA CAPITAL companies that support them.
The businesses run the gamut from health care to advertising.
Each of these companies could stand on its own. But by melding their strengths across industry boundaries,
we have created a more prosperous group, with annual sales for the group as a whole reaching US$570,000,000.

Whereas corporate groups in general branch off from a single business and form conglomerates,
the operating companies in our group stand on equal footing, with their independence secured.
The companies of UNIVA CAPITAL which are not directly engaged in business themselves provide support and coordination from a global perspective.
Their goal is to promote the integration of human capital and knowledge capital across firms, whether in the same or different businesses,
thereby increasing financial capital and helping the group become more resilient and powerful.

In other words, UNIVA CAPITAL Group is a corporate group uniting the values of each of its operating companies. 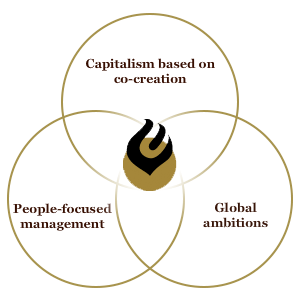 We contribute to global peace and harmony by creating
win-win-win relationships the world over in all of our activities.

Capitalism based on co-creation Our aim in forming the group and building cooperative relationships is not “co-existence.” By combining and refining our strengths, we co-create new value.

People-focused management Our people are our most important asset. In evaluating our people we focus on two dimensions vital for creating new value: action instead of connection alone and tackling the unknown instead of remaining stuck in existing routines. We aim to transform each individual’s potential (Energy) into Synergy.

Global ambitions As a global enterprise, we must think freely and act flexibly, unhindered by existing norms and national or cultural differences. Diversity is our strength. 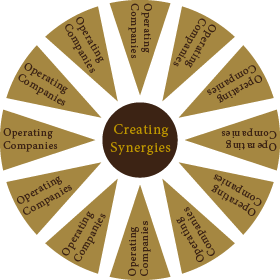 Participating in the UNIVA CAPITAL Group
~ As NAKAMA (Comrade)

Our objective is to maximize group capital, not buy-outs.

To maximize group capital, we acquire majority equity stakes in firms joining the group, share risk and participate in their management. Mergers and acquisitions are a means to build relationships where we can work closely together.

Participating in management requires a shared vision.
Differences in vision make it impossible to co-create and develop synergies with the other group companies, engage in joint problem-solving, and grow all our companies.

Effective participation requires a shared understanding of common goals and strategies.
To us the directors and employees of all group companies are NAKAMA (Comrades).
"NAKAMA" is a Japanese term that means that we work, sweat, and grow together through relationships built on mutual understanding.

Without such mutual understanding, the group creates no synergies. That is why the UNIVA CAPITAL Group does not engage in hostile takeovers.

2017.12.22
Naturally Plus Brunei participated for the first time in GEMAPK EXPO held on December 22-31.
2017.12.14
Naturally Plus flagship product IZUMIO was featured in a research report on the health benefits of hydrogenated water at the American Academy of Anti-aging Medicine (A4M) Conference, December 14-16, in Las Vegas, where IZUMIO also had a booth.
2017.12.9
Naturally Plus flagship product SUPER LUTEIN MIRTO PLUS went on sale in Malaysia.
2017.11.1
Establishment of UNIVA Communications Limited in Minato-ku, Tokyo with Hideto Murakami as CEO.
2017.10.24
At the In-House Magazine Awards 2017, UNIVA Group’s in-house magazine annual book “UNI-SIGHT 2016” was awarded the Grand Prize in the Annuals and Memories Division. Then the July 2016 issue was awarded the Silver Prize in the In-House Web Division.
2017.10.15
Naturally Plus Hong Kong held an event to celebrate the 10th anniversary of its founding.
2017.10.11
UN IVA Group is once again a sponsor of the Jubun-Shi [Autobiography] Festival.
2017.10.2
UNIVA Denki has been able to provide electricity supply to all areas in Japan (except Okinawa Electric Power Company and remote islands in Okinawa).
2017.10.2
As a part of UNIVA Social Project, UNIVA Mutual Aid Association started its operation.
2017.10.1
Naturally Plus Japan launched improved versions of its LIFTANT Firming Serum and LUTE hair and body care products.
2017.9.30
Naturally Plus held the FESTA 2017 “All Together, Advance Together: Beyond the Idea, the Decision to Act” with 8256 participants.
2017.9.23
Naturally Plus Philippines held an event to celebrate the first anniverdsary of the Baguio Business Center.
2017.9.16
UNIVA Fusion hit product KOMBUCHA CLEANSE and Naturally Plus signature product IZUMIO made an appearance in the backstage suite at the 69th Emmy Awards in Los Angeles.
2017.9.16
Naturally Plus Indonesia organized an event to celebrate the third anniversary of the setting up of Medan branch.
2017.8.5
Naturally Plus Vietnam opened a branch in Hanoi.
2017.7.25
Naturally Plus Vietnam held a special event to celebrate the second anniversary of its founding.
2017.7.21
Naturally Plus held a convention with the theme “I AM NATURALLY PLUS – DARE TO CHANGE”, in which 695 members and staff participated.
2017.6.7
Naturally Plus Taiwan celebrated Taichuang branch’s 12 anniversary.
2017.4.16
Naturally Plus Malaysia opened a branch in Ipoh.
2017.4.12
Uni Marche, the home-delivery service primarily focused on organic food products started its operation with Kazuhiro Mizuno as the representative of UNIVA Marche Limited.
2017.3.23
UNIVA Kyosai Kyodo Kumiai (Mutual Aid Association) was registered.
2017.3.11
Naturally Plus Malaysia held its convention “MY KIZUNA 2017 – Self-Realization” with 1,159 participants.
2016.12.17
Naturally Plus Taiwan held its annual DASH “Win-Win-Win, Three Wins Together, Aiming Global” with 7,628 participants.
2016.12.10
Naturally Plus Japan held its convention “Naturally Plus Convention 2099 The Latent Potential of Made in Japan.”
2016.11.24
UNIVA CAPITAL became a corporate partner of the NPO Peace One Day. UNIVA CAPITAL will promote the Peace Day (September 21) with Peace One Day in this partnership.
2016.11.01
Cold Fusion, Inc. changed its name to UNIVA Fusion Limited.
2016.10.16
Naturally Plus Malaysia opened a new business center in Ipoh.
2016.09.24
Naturally Plus Philippines opened a new business center in Baguio.
2016.09.20
UNIVA Paycast Limited had a booth at one of Asia’s largest marketing events, ad:tech Tokyo 2016.
2016.09.14
UNIVA CAPITAL sponsored the "My Autobiography Festival 2016" held at the Mitsukoshi Department Store in Nihonbashi, Tokyo.
2016.09.04
Naturally Plus Thailand held a special event to celebrate its third anniversary.
2016.09.03
The Naturally Plus Skincare series AURAGE was featured on TV Saitama’s Tokyo Goddess Collection: Girls Happy Style program.
2016.09.01
Naturally Plus leading products Super Lutein, Super Lutein MIRTOPLUS, Super Lutein MIRTOPLUS (Vegetarian), and IZUMIO have all become No. 1 in sales in Japan within six years during 2010~2015. *1. *2.
*1 Lutein supplement market in Japan: No. 1 Brand By Sales Amount, 2010 – 2015 (Total sales of Super Lutein and Super Lutein MIRTO PLUS). Market share estimated from available public data plus fieldwork interviews by Ipsos Japan, August 2016.
*2 Hydrogenated water market in Japan (excluding generation equipment and supplement): No. 1 brand By Sales Amount, 2010 – 2015. Market Share estimated from available public data plus fieldwork interviews by Ipsos Japan, August 2016.